Astronomers and historians of science have been searching for centuries for a trace or a direct reference to Hipparchus’ catalog of stars. Written by the Greek astronomer, between -170 and -120 BC, it is the oldest known attempt in the history of humanity to precisely determine the positions of the fixed stars by associating them with numerical coordinates. “This text has been replaced in the manuscript tradition by the catalog of stars contained in theAlmagest by Claudius Ptolemy. Ptolemy’s star catalog was the main source used so far to reconstruct Hipparchus’s. But there was no indication of exactly how Ptolemy had used the work of his illustrious predecessor. Which was problematic, so much so that the very existence of Hipparque’s catalog could raise doubts“, explains Victor Gysembergh of the Léon Robin Center for Research on Ancient Thought. Doubt has now been definitively lifted thanks to a few almost erased lines found on parchments from the monastery of Saint Catherine, in Egypt. 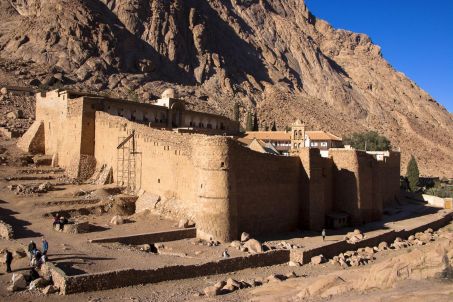 The monastery of Saint Catherine in Egypt housed the parchment analyzed by the researchers. Credits: Jacques Sierpinski / Aurimages via AFP

A palimpsest that harbors secrets

These scrolls make up the Codex Climaci Rescriptusa Christian manuscript dating from Middle Ages, written on much older pages and erased to be reused, what specialists call palimpsests. A common practice at the time which aimed to reduce the cost of producing books. But the old text has not completely disappeared and some folios have revealed the existence of a Greek poem, Les Phaenomena d’Aratos de Soles writes 300 years before our era, with, among the elements of commentary of this poem, fragments of the catalog of Hipparque. Specifically a reference to the constellation Corona Borealis and the coordinates of the stars at its northern, southern, eastern and western extremes, as the researchers explain in an article published in the Journal for the History of Astronomy.

To reveal these annotations hidden and probably lying on parchment in the 5th or 6th century AD, researchers from theEarly Manuscripts Electronic Libraryin California, from Lazarus Project and Rochester Institute of Technology used multispectral imaging. A technique that consists of measuring the light returned by an object at different wavelengths of the electromagnetic spectrum, using artificial lighting and high dynamic sensors. “It is a perfectly non-invasive and reproducible technique which makes it possible to read these writings erased by sanding, scraping or washing. It could be applied to many other manuscripts and reveal unexpected discoveries“, explains Victor Gysembergh.

It remained to go back to the origin of these inscriptions. The precision of the measurements allowed astronomers to go back in time to the time when these stars were observed. Indeed, due to a phenomenon of precession which causes the axis of rotation of the Earth to oscillate like that of a top, the position of the stars in the sky moves very slowly. The calculations thus indicate that the measurements were made around 129 BC, at the very time when Hipparchus was working on his catalogue. A result which confirms that the coordinates of three other star constellations (Ursa Major, Ursa Minor and Draco), in a separate medieval Latin manuscript known asAratus Latinusmust also come directly from Hipparchus.

The birth of astronomical science

The existence of this palimpsest attests to the reality of Hipparque’s catalog and reminds us that this Greek astronomer who divided his time between Rhodes and Alexandria deserves his title of “greatest astronomer of antiquity”. “It is estimated that Hipparque’s catalog contained between 500 and 1,000 stars and for each of them precise coordinates. It is a considerable work! That said, he may have had the help of assistants or even slaves to make these observations.“, underlines Victor Gysembergh. It is also the precision of the measurements which is fascinating: they are verified to the nearest degree, impossible to do better by working without a magnifying instrument as was the case with Hipparque. “This catalog is a document that illustrates the birth of astronomical science: Hipparque is no longer content to describe what he sees, his objective is to precisely measure and calculate in order to ultimately predict the movement of the stars.“, adds the researcher. 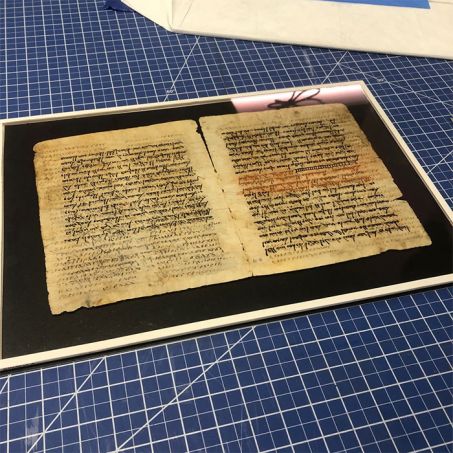 A leaf from the Codex Climaci Rescriptus. Credits: Peter Malik

The coordinates of stars discovered also make it possible to settle a controversy relating to a catalog established several centuries later: that of Ptolemy. Some specialists, for centuries, consider that Ptolemy only copied the catalog of Hipparchus. “We can now say that this is false, the coordinates of the constellations are not the same in the two works“, says Victor Gysembergh. Ptolemy is not a plagiarist, on the other hand his measurements are less precise than those of his distant predecessor.

All the folios of the Codex Climaci Rescriptus has not yet been processed and other elements could appear thanks to the multispectral imagery. They will allow, perhaps, to know a little more about the work of Hipparque. Beyond the Greek scholar, this technique is in the process of revealing several other testimonies from the past, such as a text by Ptolemy discovered in a palimpsest in Milan or an extract from Plato’s dialogue found in a manuscript in Verona. And thousands more palimpsests are waiting to be examined. “With each time the hope of discovering a manuscript faithful to the original. Unfortunately, these are manipulations that are expensive, are sometimes difficult to set up and take time.“, warns Victor Gysembergh. To continue his research, he already receives funding from the Paris City Hall and Sorbonne University.