Apple captured 57% of the premium smartphone market sales with Samsung in second place with 19% as shown in the Counterpoint chart below.

Commenting on the growth of the $1,000+ price segment, Senior Analyst Varun Mishra said: “As 5G becomes more widespread, consumers are upgrading their devices. This is especially important as the large installed base of premium iPhone users is moving to 5G.

Consumers whose finances have not been affected by the pandemic have used the extra disposable income created due to the travel restriction to buy more expensive devices, including smartphones. During the pandemic, users also realized the importance of smartphones and started to see more value in upgrading their devices. Another interesting factor is that this trend in the ultra-premium market is pervasive across all regions, despite inflationary pressures. Indeed, affluent consumers are unaffected by the current economic headwinds. Consequently, the low to mid-price segment has been hit hard by recent macro headwinds, while the high-price segment still looks strong, which has further boosted ASPs.

Additionally, the growing number of financing programs and a growing ecosystem of trade-ins and EMIs are also helping consumers upgrade their devices without paying the full price upfront.

In the mid-range ($600-$800) segment, Apple continued to dominate with a 57% share as the 4G iOS installed base continued to upgrade. 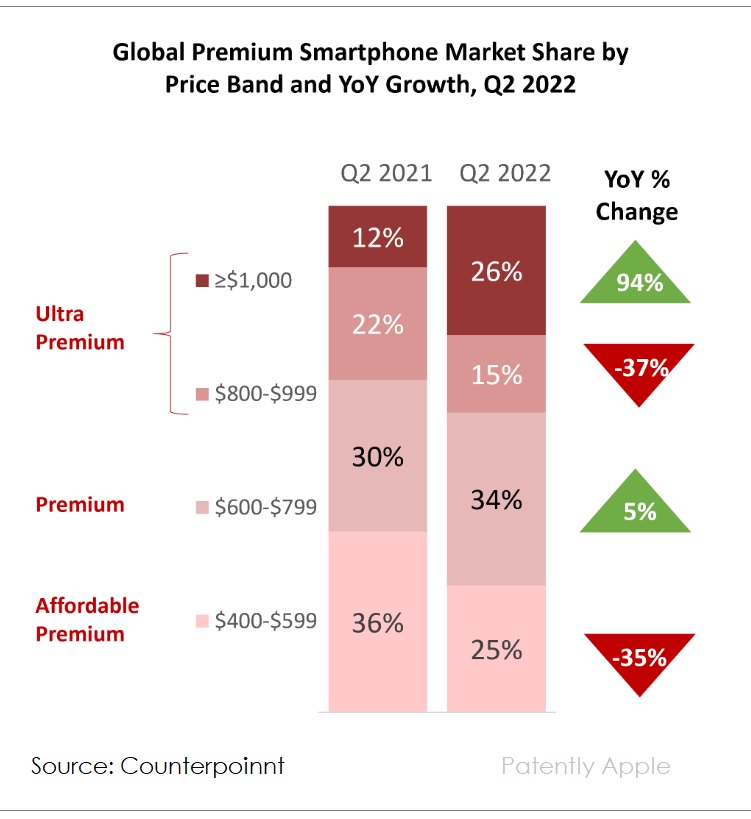 US iPhone sales and promotions remained strong throughout the quarter. There was no evidence of a macroeconomic impact on demand. Apple also continued to successfully onboard new users, with Switch growth hitting a new high in the quarter, driven in large part by robust growth in emerging economies.

With Apple capturing 78% of the Ultra Premium band in Q2 and Samsung capturing the most in the Android market with its Galaxy S22, their foldables are nowhere to be found. So it’s quite hilarious that Samsung is trying to steer the market towards foldables instead of the upcoming iPhone 14 with a new ad.